The increasing prevalence of harmful algae blooms (HABs) has spurred the need for new waterbody management techniques and sustainable treatment technologies. Traditionally, aquatic management companies and source water managers have relied on two methods for managing algae blooms: chemicals (like algaecides and alum) and diffused aeration. Chemical algae treatment can be temporarily effective, but the routine application of chemistry has raised concerns about bioaccumulation and impacts on non-target organisms. Further, diffused aeration is a method for waterbody mixing and is inefficient at increasing dissolved oxygen levels, especially near the sediment where it can be most important.

Recently, deep water, or hypolimnetic oxygen injection, has gained attention as a method for remediating lake and pond water quality. Increasing dissolved oxygen levels near the sediment can result in a shift in microbial activity, enabling aerobic microbial processes to accelerate the digestion of organics and an increase in chemical oxidation leading to oxidized metals and a sequestration of phosphorus and nitrogen. Nanobubbles have been demonstrated as an effective method for oxygen injection with several recent, closely monitored installations in small- to mid-size waterbodies. Nanobubbles exhibit unique behavior – different from larger bubbles — due to their exceptionally small size (shown in Figure 1), which makes them a highly efficient oxygen injection method. Fundamentally different from aeration, which serves primarily to mix a waterbody vertically, nanobubbles are used as a method of gas injection, transferring the oxygen in the bubble up to 20x more efficiently than larger bubbles. Further, these small bubbles create a mild oxidative impact on collapse that contributes to the direct breakdown of algae and oxidation of organics.

Fig 2: One of the trailer-mounted nanobubble generators deployed near an urban lake for deep-water oxygenation.


On a recent installation in Northern California, nanobubble injection was used to increase oxygen levels in an urban waterbody that faced persistent hypolimnetic anoxia leading to routine algae blooms. In severe bloom periods, the waterbody was closed to public recreation due to hazardous levels of algae and algae toxins. The lake was about 10 acres in size and 20 feet deep at its deepest point, but anoxic conditions commonly existed below 10 feet. Three trailer-mounted 150 GPM nanobubble generators (Figure 2), with onboard oxygen generation were installed to recirculate. The suction and discharge lines were specifically oriented to pull water from and reintroduce it to the hypolimnetic layer to prevent thermal mixing. Within two weeks of nanobubble oxygen injection, oxygen levels (Figure 3) had increased at the sediment layer from 0 ppm to 3.5 ppm, levels sufficient to support aerobic microbial activity. Further, within four weeks of oxygen injection, oxygen had risen to levels consistently above 5 ppm, high enough to support a healthy fish ecosystem. Oxidation-reduction potential values, often referred to as ORP or redox values, were also monitored. Along with the increase in dissolved oxygen, ORP values shifted from -350 mV, indicating a strongly reductive, anaerobic environment to +400 mV, indicating oxidative conditions that can support the oxidation of iron and the sequestration of ammonia and phosphorus. Corresponding to the increase in oxygen and ORP, hypolimnetic phosphate and ortho-phosphate values showed a 75% and 68% reduction respectively, reducing a key contributor to algae blooms and lake closures. 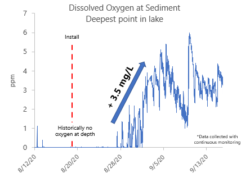 Treating water, whether in a small pond or a large lake, can be a challenge. Traditional methods of chemical treatment and conventional aeration can have disadvantages, both environmental and economical. Nanobubbles for algae control and oxygenation provide a chemical-free, cost-effective method for long-term pond and lake management. Installations such as the one in Northern California demonstrate the effectiveness of nanobubbles for oxygen injection and the use of deep water oxygenation as a viable method for managing waterbody health.

Learn how the unique chemical and physical properties of nanobubbles provide value for lakes and ponds to reduce algae and algae toxins, increase water clarity, and more...