With the growing impacts of climate change and other pressures such as drought and fertilizer shortages, this is a question that has never been more important in the agriculture field: How do we improve soil structure and function?

The primary function we will focus on is that soil is a medium that plants need to grow where their roots develop and take up nutrients and water. Other functions of soil are:

Soil structure refers to the shape, size and special arrangement of individual soil particles and clusters of particles or aggregates.

One of the most significant soil structure problems that growers around the world are facing is soil compaction and low water infiltration. Compaction is a factor of soil type, degree of farm equipment traffic, time for which it has been used for agriculture and other factors that reduce the natural, healthy structure of soil that plants need to grow and that water uses to mobilize. Compaction prevents irrigation water from flowing efficiently throughout the root zone which can be a stress factor for plants.

Reduced availability of water in the root zone also means that nutrient mobility is negatively impacted, which has a direct correlation with plant growth and yield.

High salinity, especially in river delta regions where clay soils are common, is also a challenge that many growers face. A buildup of sodium and other soil salts reduces the movement of water and nutrients between plant cells and soil as well as the movement of water within the plant. This lack of water and nutrient mobility leads to plant loss and yield decline. Salty soil can also negatively impact plant health because it ties up nutrients like nitrogen, reducing the plant’s ability to take it up. This reduces plant growth and stops plant reproduction.

As climate change progresses, extended periods of more severe drought are also becoming more common. When soils experience drought, their ‘wettability’ (the ability for water to maintain contact with soil) is lowered, and without direct intervention, water infiltration in drought-affected soils will remain very low.

Growers also constantly struggle with low soil nutrient levels due to decreased levels of organic matter and other factors. Without adequate nutrients in the soil, microbial communities do not thrive as they should, and growers must spend more on fertilizer.

What do plants grown in soil need to thrive?

Greenhouse, field and orchard growers around the world have installed nanobubble generators to improve the properties of their irrigation water, consequently having positive effects on soil structure and function.

Nanobubbles measure between 70-120 nanometers in diameter, roughly 2500 times smaller than a grain of salt. Due to their neutral buoyancy, they move randomly and continuously through water in all parts of an irrigation system via Brownian motion. Nanobubble-enriched water is super-oxygenated, has significantly reduced surface tension compared to untreated water, and possesses other unique chemical and physical attributes such as ionic mobility. 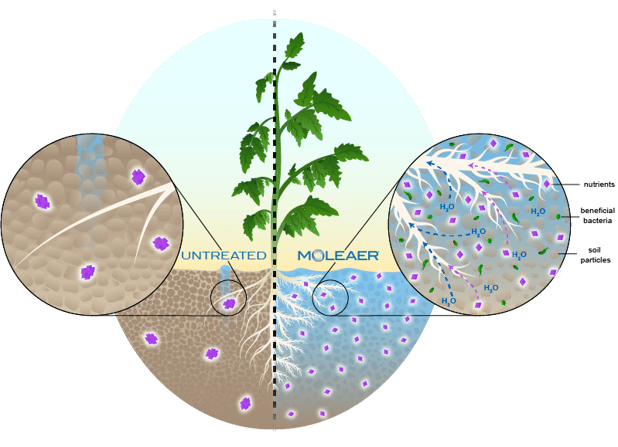 Nanobubbles improve soil flocculation, which improves the soil structure by pulling together individual clay particles into larger aggregates. Due to these properties, when nanobubble-treated water is applied to compacted soils, compaction is reduced. At the Kapicua Research center, a blueberry grower in Chile performed trials with nanobubble-treated irrigation water from July 2020 to April 2021. A Moleaer generator was installed on the main water storage tank. 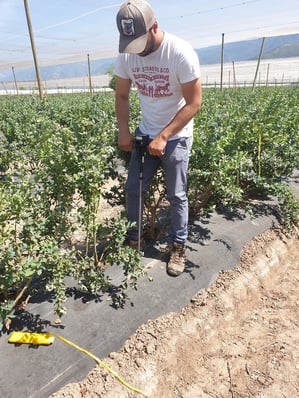 Water infiltration has also greatly increased at Maricopa Orchards in California due to the use of nanobubble-treated irrigation water. As described in a recent case study article, Maricopa faced many challenges, such as drought, clay soils and high salinity. After nanobubble-treated water was applied, water was able to infiltrate to an unprecedented depth of 46 inches. Irrigation water use efficiency therefore increased, tree performance improved, and the significant problem of soil salinity was permanently solved, as salts are now carried down well beyond the root zone. 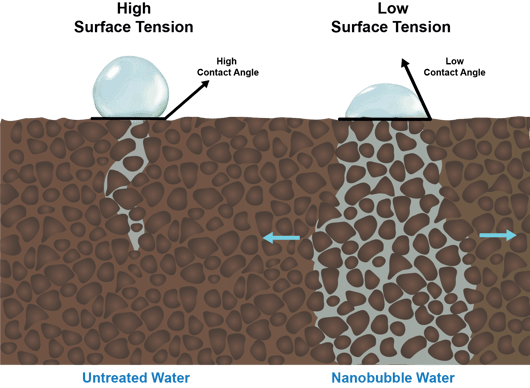 Because it improves soil aeration, nanobubble-treated irrigation water also increases soil microbial activity and nutrient availability. Higher soil oxygen levels boost the activity of beneficial soil microbes, as well as rates of soil mineralization and nutrient conversion. For example, authors of a new 2022 study found that bacterial functions of methanol oxidation, nitrogen fixation, aerobic chemoheterotrophy (consuming other organisms) and cellulolysis (for example, catalytic conversion of starch to glucose or the formation of acids or bases from dissolved ions) were more abundant in soils provided with nanobubble-treated water. This resulted in higher crop yield, water use efficiency and soil fertility.

In addition, because nanobubbles significantly increase the levels of dissolved oxygen (DO) in irrigation water (to about 20 ppm) and its oxidation-reduction potential (ORP, a measure of water’s oxidizing capacity to break down contaminants), they promote the growth of beneficial microbes such as mycorrhizae and suppress the growth of oxygen-averse pathogens such as Pythium and Phytophthora.

In addition, the super-oxygenation of nanobubble-treated water assures optimal root function. That is, if root cells receive super-high levels of oxygen in the water they absorb, they are able to produce huge amounts of cellular energy (ATP) through its respiration process. This powers high rates of water and nutrient absorption, causing high corresponding overall plant growth rate and yields.

A recent study of rice plants found that providing plants with nanobubble-treated water “up-regulated the plant nutrient absorption genes OsBT, PiT-1 and SKOR, resulting in increased nutrient uptake and utilization by the roots.” Nanobubble-treated water was also found to stimulate synthesis of the growth hormone gibberellin. This team of scientists concluded that the use of nanobubbles “significantly improve plant height and root length.”

In another recent study (of tomatoes and cucumbers in soil-based greenhouse production), scientists found that – mainly due to the higher (and sustained) soil oxygen content that it provides – nanobubble-treated water significantly increased crop yield, water use efficiency, Vitamin C levels and soluble sugar content.

With the growing impacts of climate change and other pressures such as drought and fertilizer shortages, this is a question that has never been more important in the...

Of all liquids, water has an extremely high surface tension due to the very strong bonding of water molecules. Surface tension is caused by the strong cohesive interactions...

Solutions for greenhouse growers At Green Circle Farm – as is the case at most greenhouse operations – Pythium and other root diseases are a constant threat. Green Circle...