Of all liquids, water has an extremely high surface tension due to the very strong bonding of water molecules. Surface tension is caused by the strong cohesive interactions between molecules in a liquid. A water droplet on a leaf is an example of surface tension. Tension forms on the surface of the water droplet because all the molecules are pulling each other equally in all directions causing a net force of zero.

The rates of infiltration and percolation of water in soil can be low or uneven because water molecules are much more attracted to each other than to soil particles.

When water infiltration is low, water pools on the soil surface instead of permeating downward through the soil to the root zone. The water is wasted on evaporation, runoff or both. Low percolation means that less water is going through the soil profile to the roots causing roots to suffer.

Plant roots can only grow where water is present. Lack of water results in shallow root systems and plants that are extremely susceptible to drought and other environmental stressors.

Too much water causes root death from lack of oxygen, which is necessary for plants to take up nutrients and water. If roots don’t get enough oxygen, they become less permeable, take in less water and no longer absorb nutrients properly. If oxygen deprivation continues, plants begin to starve from lack of nutrients, roots die, and the plant’s growth is stunted.

To understand the importance of surface tension reduction of water for plant health, it’s important to explain soil texture and how this relates to infiltration, percolation and water retention capacity of soils.

All soils are defined by their texture, or percentage of sand, silt and clay mineral particles. Soils with high percentages of clay particles have slow infiltration and percolation rates. Clay soil particles are very fine, flat-shaped minerals that lay similar to the structure of bricks, reducing the ability for water to infiltrate. They also have high water holding capacity because water is held closely to clay particles.

Plants growing in highly clayey soils have two potential issues. First, they may not receive enough water because water cannot penetrate the soil surface and instead pools on the surface and is wasted to evaporation, runoff or both. Second, when water infiltration does happen, abate very slowly, the water is held longer in the soil profile. This can lead to waterlogging that inhibits fine root growth and leads root death.

Soils can also become hydrophobic when they contain large amounts of hydrophobes: water-repelling organic molecules that result from microorganism interactions with organic materials. The higher the hydrophobic (water-repelling) nature of a particular soil, the lower the infiltration rate of water.

Soils with large amounts of sand particles are similar to hydrophobic soils because the waxy texture of sand reduces it’s capacity to hold water. Sandy soils have a low water holding capacity with high infiltration and percolation rates. A potential challenge with sandy soils is that growers have to use more water to keep available water in the root zone for plant roots to take up.

Ideal soils are called loams and usually have a small amount of clay particles with a good mix of sand and silt, another mineral particle in soil.

To reduce issues with infiltration and percolation of water through soil, it’s helpful to provide plants with irrigation water that has low surface tension. Efficient water infiltration to the root zone is critical for high rates of water, nutrient and oxygen uptake by root cells resulting in higher rates of plant growth and higher yields.

Traditional means of reducing surface tension of water is done through applying chemical surfactants, which are costly and have potential environmental issues. The use of chemical-free nanobubbles efficiently reduces irrigation water surface tension and also economically provides other benefits that improve plant health, reduce disease pressure and boost yield.

Nanobubbles in water act like a chemical-free surfactant to reduce the intermolecular forces of water. Surfactants, or surface-active agents, by nature, reduce surface tension, increasing spreading and wetting properties.

Nanobubbles measure 70-120 nanometers in diameter, roughly 2500 times smaller than a grain of salt. Due to their neutral buoyancy, they move randomly and continuously through water and all parts of an irrigation system via Brownian motion.

Nanobubbles have high internal pressure and a hard surface. When they burst, they break the surface tension of water. Each nanobubble typically remains suspended for months before eventual collapse, but with the typical concentration of hundreds of millions of nanobubbles per mL of water, bursting occurs at a steady rate.

In addition, the movement of nanobubbles and their positive charge reduces the cluster sizes of water molecules, which also boosts infiltration.

Kapicua partnered with a blueberry grower in Chile to trial nanobubble-enriched irrigation water from July 2020 to April 2021 to study improved soil structure using nanobubble technology. A Moleaer generator injected nanobubbles into the main storage tank of the irrigation system and provided a 50% increase in dissolved oxygen. 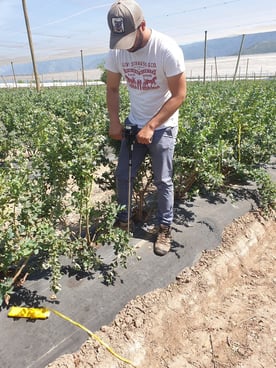 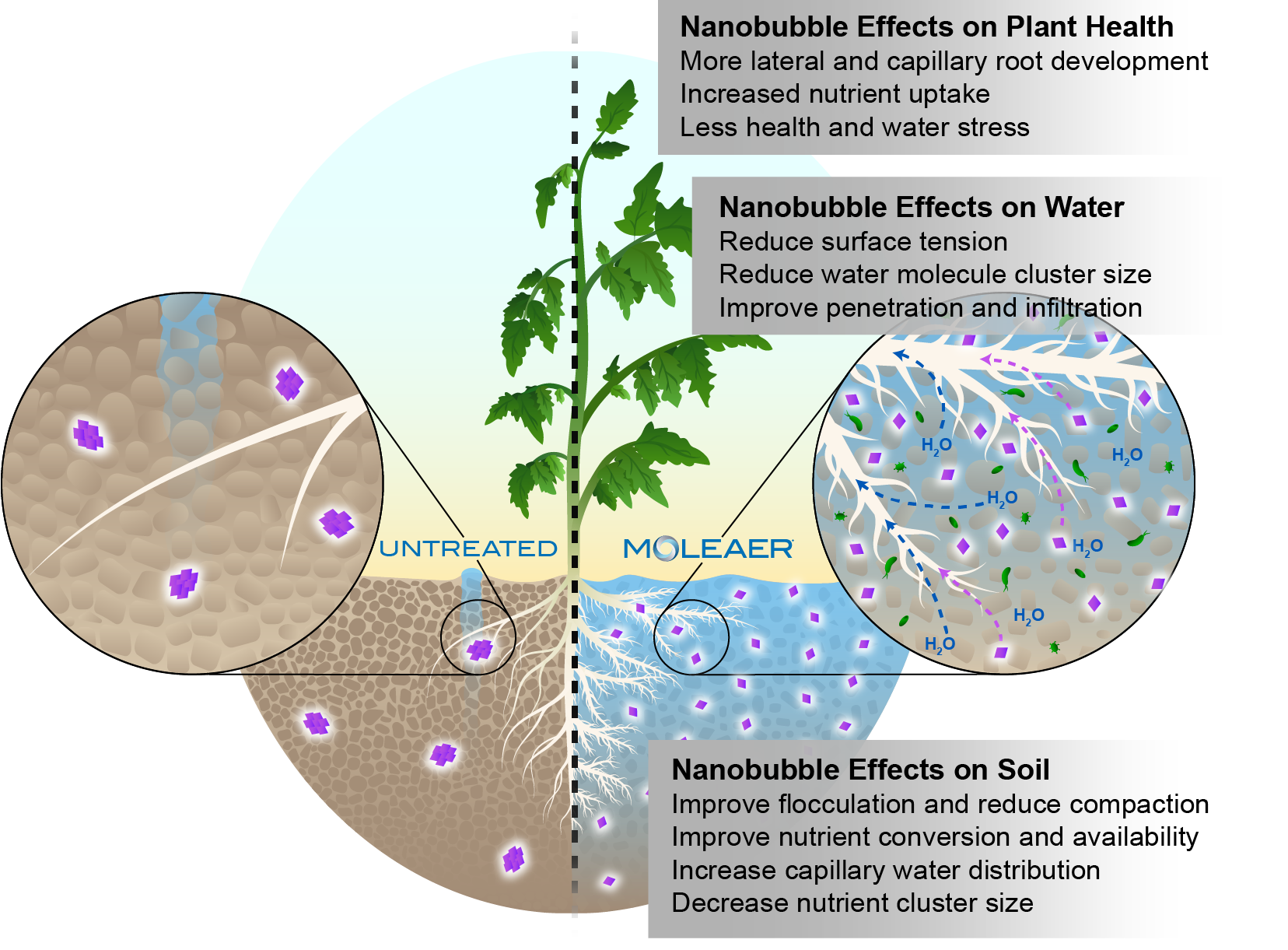 The unique chemical and physical properties of nanobubbles in irrigation water also provide many other crop cultivation benefits.

Through their constant movement and oxidizing action, nanobubbles also physically abrade biofilm deposits within water basins and irrigation tubes while also preventing it from re-forming. Biofilm is pervasive on most surfaces that are in frequent contact with water and can harbor pathogens. The use of nanobubbles also results in less backwashing (and less downtime) in media filter management.

The positive charge of nanobubbles increases the dispersion of ions and thus achieves a more homogeneous nutrient concentration,

One of the most significant effects of nanobubbles in water, however, is super-oxygenation

Oxygenation assures optimal root function. That is, if there is limited oxygen available to root cells, they are therefore limited in the amount of cellular energy (ATP) they can produce, which in turn limits their rate of water and nutrient absorption, directly limiting overall plant growth rate and eventual crop yield.

In rice, a recent study found that providing plants with nanobubble-treated water “up-regulated the plant nutrient absorption genes OsBT, PiT-1 and SKOR, resulting in increased nutrient uptake and utilization by the roots.” Nanobubbles also stimulated the synthesis of the growth hormone gibberellin. This team of scientists concluded that nanobubbles “significantly improve plant height and root length.”

The use of nanobubbles efficiently reduces the surface tension of water while at the same time economically providing other benefits that improve plant health, reduce disease pressure and boost yields.